Before I really started getting into baking, I usually baked quick breads because they were simple, easy, and always yielded good results. No need to fuss with yeast or complicated procedures or worry about the delicateness of peaks of beaten egg whites. Quick breads are so robust that you can basically throw anything in there along with the  standard flour, sugar, eggs, etc… and you’ll still have something that tastes good. Plus, you can make so many substitutions. Who cares if you only have one egg left? Just add in some applesauce.

One of my favorite quick breads is this whole wheat and millet banana bread from Joy the Baker. I love the extra crunch millet gives to the bread. I usually add in chocolate chips, which make the bread even more delicious. (You can also make chocolate chip cookies to surround your quick bread with to make it look even prettier. :P) 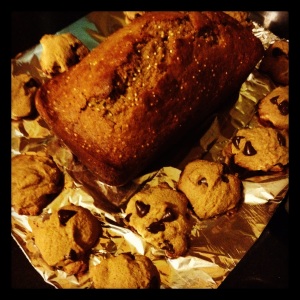 Another good quick bread is beer bread. You can make any kind of bread you want with just a can of any beer. It shouldn’t be good beer either. In fact, the worse the beer, the better. (So you don’t feel so guilty about using the beer in bread instead of drinking it). With several cans of leftover PBR, I made all different kinds of bread, including cinnamon raisin, green chile cheddar, and rosemary and thyme. Beer bread is so easy – it’s basically just flour, beer, and whatever else you want to put in it. Here’s a couple of good beer bread recipes, with several variations: Beer Bread 4 ways and Easy Beer Bread.

Adding a little something extra to your quick bread is always fun, and can be as simple as incorporating chocolate chips and millet or swirling in cream cheese or jam. One of my friend’s favorite quick breads that I made is a pumpkin loaf with a layer of cream cheese in the middle. I did a variation of this bread using apple sauce instead of canned pumpkin and swirling the cream cheese instead, following this recipe.

Another bonus of quick breads is that if you have leftovers, you can always make muffins! 😀

Sometimes you just want to bake something simple, easy, and foolproof. Lately, I’ve been feeling a bit off if I don’t bake something that week. And if I don’t want to deal with the added stress of yeast or some fancy French technique, I know I can always turn to the old, reliable quick bread and make something delicious. Quick breads may not be nearly as impressive or exotic as some other baked goods, but in my experience, they will always work and that reassurance is sometimes all you need.