Last Thursday, one of my favorite bands (Of Monsters and Men) was playing a special show at Nightlife at The California Academy of Sciences in Golden Gate Park in San Francisco. I was so excited to go since the tickets were only $12 and the Academy of Sciences is such a fun museum. A cross between a science museum and a natural history museum, its major attractions include an indoor rainforest, planetarium, aquarium, and rooftop garden that looks like it’s straight out of The Teletubbies.

Every Thursday night, the Academy of Sciences hosts Nightlife where they open the museum up to the 21+ crowd, serving beer and cocktails as you wander through the museum. (They do check IDs, which I learned the hard way when I tried to sneak in when I was 19. What a rebel I was. :P) I’ve been a couple times before, but always missed the planetarium shows. So once my friends and I entered, we made a beeline for the planetarium to get tickets for their show on the landing of Mars Curiosity. The planetarium is an amazing half dome screen with seats so comfy, it’s hard to not sleep in them (the only other time I actually saw the show, I ended up sleeping through it since the seats were so comfy and I was dead tired… oops!).

After the show, we wandered through the three-story rainforest, admiring the foliage on each level and the beautiful butterflies flying about.

Next, we walked through the massive aquarium that houses a huge variety of aquatic life, including jellyfish (of all different colors), beautiful coral reefs, and an albino alligator! 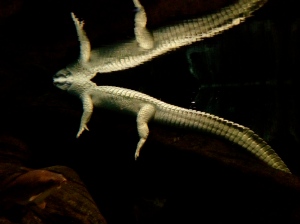 The California Academy of Sciences is a fun museum that caters to both adults and kids. And their Nightlife event is definitely a great night to spend with a date or hanging out with friends. As a kid, I had always wanted to be in a museum at night and thanks to Nightlife, I’ve finally experienced it as an adult. If you’re ever in San Francisco, you should definitely make sure to pay a visit to this awesome museum.