I’ve been reading Jen’s blog, use real butter, for nearly five years now. Whenever I wanted a break from studying in college, I’d look up her blog to read about her new adventures and drool over her amazing food photographs. Her kickass attitude and triumphant battle with cancer has inspired me to be a strong, independent woman like her.

So, when I saw her post about Tacubaya in Berkeley a few years ago, I vowed to myself that I’d go there someday, not knowing (but hoping!) I’d eventually be going to Berkeley for grad school. It took me almost a year to get my butt down there, but I finally paid the taqueria a visit after getting a pedicure on Fourth St. (It’s definitely not your hole-in-the-wall taco joint like the ones in the Mission or the taco trucks in Oakland, probably because it wouldn’t fit in with the classier, more posh part of Berkeley that is Fourth St.) 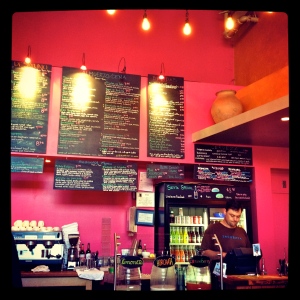 Despite having grown up in New Mexico, I am rather loath to eating Mexican food (although New Mexicans make a clear distinction between Mexican and New Mexican food). Perhaps growing up surrounded by tacos, burritos, and enchiladas (which I still cannot eat to this day after rather unappetizing versions served for school lunch) has dampened by desire for Mexican cuisine.

Tacubaya was much different than most Mexican restaurants I’ve been too. The food was very fresh, crisp, and surprisingly light. A lot of Mexican dishes can be heavy, loaded with beans, rice, or potatoes. It was actually quite refreshing eating the food at Tacubaya. 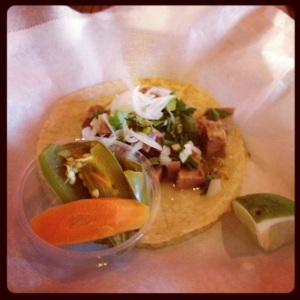 They offer a wide variety of tacos, from the traditional taco al pastor to the more exotic taco de lengua. Intrigued by the tongue taco, I knew I had to order it. The pieces of beef tongue were pretty moist and juicy, not as chewy as I would have guessed. However, I couldn’t think about what I was eating too much because the thought of eating a tongue did gross me out a bit. The taco was very light and refreshing, just what I’d want from a taco. If you’re ever in Berkeley, definitely check out Tacubaya on Fourth St! I know, why would you go to the Bay Area for Mexican food? But trust me, you won’t be disappointed.