A few months ago, I went to Michael’s and was handed a 50% coupon. I didn’t want to spend a ton of money, so I decided to buy a doughnut pan. It was one of the best purchases I’ve made! Since then, I’ve been baking doughnuts non-stop.

I’ve never really been a big doughnut fan, but for some reason, after I bought my doughnut pan, I was hooked on making them! I even have a board on Pinterest dedicated to just doughnut recipes. One of my favorite recipes is this banana doughnut with peanut butter glaze from Shutterbean.

They’re basically a cross between a doughnut and banana bread. The doughnuts were incredibly moist, but it’s the peanut butter glaze that you’ll rave about. Feeling a bit lazy, I didn’t brown the butter. I’m sure if you did that, the frosting would taste even better! Since my doughnut pan only bakes six doughnuts at a time and I was a bit too impatient to wait to use the pan again, I used the rest of the batter to make muffins. So if you don’t have a doughnut pan, you can just turn this recipe into muffins! Also, you might notice from the photo that three are in the shape of Mickey Mouse. When my family went to Disneyland for Christmas, I just had to buy a silicone Mickey Mouse shaped muffin pan. They’re so cute! 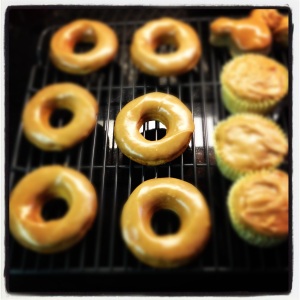 The combination of the banana doughnuts and the peanut butter glaze is amazing! It’s just like eating a peanut butter banana sandwich, but a little less messy since bananas aren’t flying out whenever you take a bite. Also, these doughnuts are super easy to make and they come out so beautifully! If you’ve got a doughnut pan at home and want to do a little something different for breakfast, I definitely recommend trying out this recipe. The only thing you’ll probably regret is that you didn’t bake these doughnuts earlier, just like me!