Being Chinese-American, I’ve been to a lot of Chinatowns, dim sum restaurants, and of course, Chinese bakeries. Whenever we visited my relatives in Oakland, we’d always go to Chinatown. And if we didn’t happen to eat dim sum that morning, we’d always go to my mom’s favorite bakery to buy a big pink box filled with everyone’s favorite Chinese buns and pastries. Most people love the pineapple buns (bo luo bao) and praise the crunchy sweet topping. However, I was an exception and preferred the light, fluffiness of the bread over the topping. Luckily, my brother was like most people, so I’d trade him the topping of the bun for the fluffy bread. 🙂

For years, I’ve been mystified by how those buns were always so fluffy, thinking those Chinese ladies in those bakeries had some magical powers. Recently, through thorough searching on the internet, I’ve discovered their secret to achieving such soft, fluffy bread. Apparently, it’s tangzhong, a scalded dough that helps keep the bread soft.

I thought I’d jazz the bread up a bit by adding a few drops of Pandan extract that I had bought from the local asian grocery store. Be careful to only add a couple of teaspoons since the extract is very intense. As you can see from above, it turned the white dough into a dark, green color. Alien dough anyone? 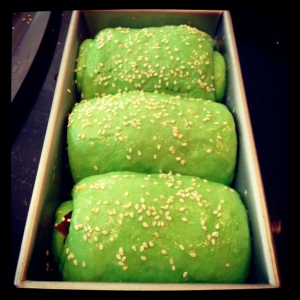 First, I decided to make loaves of Pandan bread. I think I let the dough rise too long, so the rolls were pretty huge and I could only fit in three rolls of bread into my loaf pan. Since I was going all out, I decided to add a layer of red bean paste inside the bread and a heavy sprinkling of sesame seeds on top. The bread baked beautifully, rising out of the pan and browning on top. However, make sure to bake it long enough. Deceived by the browned top, I took the loaf out too early and certain parts of the inside, specifically the parts of the rolls that joined together, were not cooked enough. But most of the bread was perfect, so soft and fluffy!

With the leftover dough, I made pineapple buns. My brother found this recipe for the infamous pineapple topping (in US units! yay!), which actually has no pineapples in it. 😛 Instead, it’s a mixture of eggs, sugar, butter, and flour. After I had placed the flat, round disks of topping (rolled out by my wonderful brother) onto the buns and scored the tops, I realized that the buns looked exactly like little turtles! So cute! 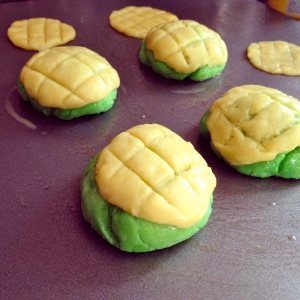 Once I took the buns out of the oven, my mom quickly grabbed one and took a bite. Ignoring my protests that they needed to cool, she countered that buns always taste best fresh out of the oven. I definitely cannot argue with that. So listen to my mother and eat these right after you take them out of the oven! 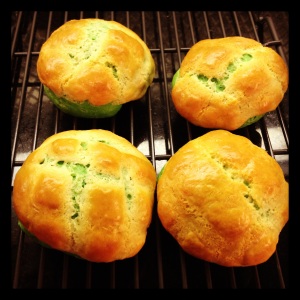 Although this bread and these buns are a lot of work (and waiting), they are definitely worth it. Your friends and family will not believe you when you say you made them yourself because they look exactly like store-bought Chinese bakery buns. My mom was so amazed that she wanted me to make them whenever we have guests over. Your mom wanting to show off your buns is definitely the best form of flattery. (If you got that pun, get your mind out of the gutter! haha)

But the most satisfying part of making the bread and pineapple buns was making them with my younger brother. It may be a bit surprising, but he’s actually the baker of our family. All throughout middle school he’d bake cookies, cakes, and cupcakes for his classmates and teachers. His friends even got him a standing mixer for his birthday! Along with our mutual love for Snow Patrol, our love for baking has helped us bond and become closer siblings. Baking with my brother was so much fun that the idea of opening a family bakery crossed my mind. Maybe that’ll be my back up plan if I ever decide that grad school isn’t for me…

1. Combine the flour, salt, sugar and instant yeast in a bowl of a stand mixer. Make a well in the center. Add in all wet ingredients: milk, egg and tangzhong and pandan paste. Knead until your dough comes together and then add in the butter and continue kneading.  Keep kneading until the dough is smooth, not too sticky on the surface and elastic. (Kirbie’s recipe says she kneaded the dough for about 18-20 minutes. I didn’t knead it quite that long, probably only 10-15 min. But I forgot to do the window pane check, so not sure if my dough was actually kneaded long enough. Whoops!)
2. Knead the dough into a ball shape. Take a large bowl and grease with oil.  Place dough into  greased bowl and cover with a wet towel. Let it proof until it’s doubled in size, about 40 minutes.
3. Transfer to a clean surface. Divide the dough into four equal portions. Knead into balls.  Cover with cling wrap, let rest for 15 minutes.
4. Roll out each portion of the dough with a rolling pin into an oval shape.  Take one end of the dough and fold to meet the middle of the oval. Take the other end and fold to meet on top. (Check out Kirbie’s website for step-by-step pictures. These really helped me a lot when I was rolling the dough).
5. Flip dough over with the folds facing down,and flatten dough with rolling pin. Flip dough over so the folds face up. (If you want, slather on a layer of red bean paste like I did here). Now roll the dough up. Place each of the rolls into the bread pan and put a piece of plastic wrap over the rolls. Let them rise until double the size, approximately another 40 minutes. (Since I was busy making the pineapple buns, I probably let the dough rise a lot longer… oops).
6. Beat an egg and brush egg mixture on top to create shiny egg wash finish. Sprinkle sesame seeds on top!
7. Bake at 330 degrees F for approximately 30 minutes.

How to Prepare Topping:
1. Beat the butter and sugar until creamy and fluffy.
2. Add egg yolk, baking soda, and milk together, and mix well.
3. Sift the flour and baking powder into the butter mixture, and mix by hand until it’s smooth and not sticky. Be careful not to manipulate it too much as it will form gluten (we didn’t really see this step and didn’t notice any gluten forming)
4. Wrap the topping in plastic and refrigerate it for an hour and a half minimum.

How to Make Pineapple Buns:
1. Shape dough into equal sized balls, cover with plastic wrap, and let rise for at least 15 min.
2. Take the prepared pineapple topping and roll it to a thickness of about 1-1.5 in.
3. Brush the buns with a small amount of water, and place the pineapple topping ontop of the buns. The water will help the topping stick to the buns.
4. Take a knife and lightly score the toppings with a criss-cross pattern.
5. Lightly beat 1 egg yolk and brush the buns and toppings with it. The egg yolk will provide the buns with a nice rich yellow color.
6. Bake the buns at 375 degrees Fahrenheit for 10 min.
7. Let cool slightly, then devour!

3 thoughts on “Soft and Fluffy – Pandan Bread and Pineapple Buns”